To paraphrase the late, great Jewish writer Sholom Aleichem, golf instructors are just like lawyers are just like physicians: what one says, the other contradicts. Concerning the sequencing of the body during a well-executed golf swing, it seems like every instructor will give you a different answer as to what follows what. And it could very well be that the golf swing is so complicated and human bodies and minds are so different that there isn’t one standard sequence everyone can rely upon to bring the clubface squarely into the ball, smack on the sweet spot, at impact. Yes, there are basic fundamentals to the swing, but a good deal of trial and error is needed to determine the proper sequence those fundamentals apply for each golfer. My 15 year old Great nephew Matthew is a tall, wiry, strong kid, who, with the flexibility of a rubber band, hits the ball consistently about 300 yards (helping to take his high school team to a second place in his state’s championship). I, on the other hand, approaching 71, have as much flexibility as a pine cone (hyperbole alert!), averaging anywhere between 180 and 210 off the tee (with an occasional 230 at max). I’ve worked hard at the gym to better those figures, but time and gravity are not exactly working in my favor.

I’ve also worked hard on the range to assess what changes I needed to make in my swing sequence to compensate for my changing capacities, and expectations, for my aging body. My latest experiments are reactions to a lower back that has a tendency to become inflamed either with the excessive twisting and turning and compressing of a golf swing, or simply getting out of bed in the morning. The muscles around the spine must suffer from their own version of PTSD for golfers, causing chiropractors and physical therapists to bow each day to the gods of golf and their supporters.

So, if I can dare venture into this maelstrom of opinion, are there basic fundamentals that most can agree to involving the sequence leading to and then activating the golf swing for men, women, children and the World’s Greatest Golfer, Snoopy? As with any action, from robbing a bank to striking a golf ball, a thought and series of subsequent thoughts, preceded it. For Willie Sutton, when asked why he robbed banks, the famed crook simply said, “That’s where the money is,” so we know his “pre-shot” thoughts. With golf, we can also look to the the pre-shot routine sequence for the origins of a successful swing. With every club, from driver to putter, the first thoughts involve distance and direction. Distance determines what club we use and how much swing speed is needed. Direction determines where we aim, and how we align our bodies and clubface according to our intended ball flight. How we accomplish this has been covered before in previous posts or in my book.

After we aim properly, we begin the swing either with a forward press or a waggle to transition from stillness to movement. This is a highly personal decision so you choose. The backswing, too, is highly personal, and does not elicit a great amount of controversy, at least from a survey of the comments that have graced my blog. Two important swing thoughts are to keep the head steady and forward arm relatively straight. Now, at the top of the backswing comes a point when golf transmogrifies from being a sport as action packed as watching paint dry to one of acceleration that rivals and sometimes surpasses a pitcher’s fast ball or a point guard’s drive to the hoop: the downswing. That gets more page views and comments than anything else I’ve ever posted in my several years of writing this blog–comments that have ranged from “having studied hundreds of instruction texts all the way back to 1857, I would rank these posts among the best of the bunch,” to something with the word, “moronic” imbedded in the text. At times, it ain’t easy writing a golf blog.

But I digress. Back to the downswing sequence, a topic which has drawn more venom and sugar than any other. There are several schools of thought, here, none of which “utter its final doctrine,” as Alan Watts said of Buddhism. The general consensus is that the lower body, i.e. the legs and hips, start the downward sequence of action towards impact, with core and shoulders next, and the arms and hands to follow. However, with the club moving anywhere from 70 to 120 mph, if the sequence is off just slightly, harm can come to the shot’s success. In other words the clubface may enter the impact zone skewed to the square position it should be. Now here’s where golf becomes the nuanced, challenging, frustrating, and rewarding game it is. Each golfer must fiddle and experiment with the sequence of the above actions until the flight, sound, and sight of his or her ball passes quality control. This is where the range becomes an outdoor lab, and the more balls hit, the more reliable and effective the results. In fact, this alone separates the pros from amateurs: Their bodies are more conditioned and they have more time to hit more golf balls, with more  supervision from their instructors, on the range. Touring pros also have the power to improve the weather by moving and settling in different parts of the U.S. or the world at different times of year.

But the legendary Ben Hogan offered a good solution by visualizing and observing his swing even in his motel room during tournaments, working on the very sequences I’m referring to. Of course, there are other strategies too, such as going to your nearest golf store, feigning to buy a club, and making a number of swings on their launch monitor stations. As for buying the club afterwards, “I’ll think about it,” usually works fine in fending off an over-eager salesperson. But, unless you live in extreme northern climes, there are usually at least a few days in the winter, where the weather is clear enough to hit the range and experiment with swing sequences.

The nice thing about experiments such as these is that you can see the results, and make adjustments, with the outcome of each shot. So with irons, in order to hit down on and compress the ball, the weight must quickly shift over the forward side at the start of the downswing, with the driver that weight shift can be delayed some allowing the club to strike the ball on the upswing as the club comes through impact. You’re not hitting down and through with the driver: You’re hitting up and away. Eventually the weight does fully transfer to forward side, but not as fast as it needs to shift with irons. Of course, for both irons and driver, the head remains steady until after impact. There are a million other factors, as Rocco might say, but that should get the experimenting started.

Give it a try. Take good notes. And send me a report of your progress…if you have the time. 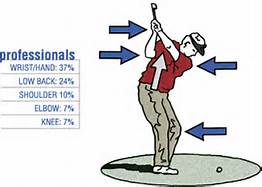 With the holiday season upon us, please consider my book The Mindful Golfer: How to Lower Your Handicap While Raising Your Consciousness as a gift to yourself or the golfers in your circle of family or friends.

“Entertaining and informative, The Mindful Golfer expresses ideas very much in synch with Zen Golf in a playful and engaging way.”
— Dr. Joe Parent, author of Zen Golf: Mastering the Mental Game