You are here: Home / Balance / The Key Downswing Move

At the transition between the back and downswings there is a point in time and space that sets the tone for the coup de grace of the golf swing, namely impact–that vital moment when the hands lead the clubhead down and into the ball, compressing the ball, which leaps to an elliptical surge, tracing a trajectory, if hit true, like a mortar shell. The battlefield of golf. An explosion of energy, an expression of aggression without corresponding recoil. We shop at the market. We drive in traffic. We work at ordinary jobs in ordinary buildings with ordinary people who wish us ordinary good mornings, good nights, and good weekends. All pretty mild stuff. But impact in a golf swing? That’s bombastic. That’s hyperbolic. That’s sesquipedalian (just look it up). I don’t care if you’re Maude Frickert swinging at 60 mph (RIP Jonathan Winters). Impact is exciting.

I know most instructors teach that the downswing starts with the legs and hips, followed by the upper body and arms, but I have a different hit on it, based on observation and personal experimentation. Watch any slo mo, Peter Kostis analysis of a pro’s swing and you’ll see that the downswing starts with the hands and arms which lead the lower body into the impact zone. It’s a swing, after all, and what’s the most logical part of the body to lead a swing? The arms and hands. Leading is their natural function. The grosser lower body follows adding density and bulk to the equation. Witness Jack Nicklaus in his prime. In fact, the actual key that should start the downswing is driving the butt of the left hand downward toward the ball. That key downswing move is the signal for the body to begin to move its weight forward and clear the hips out of the way to allow the arms and hands to swing through. But most importantly, this move delays the hit, creating a greater angle of lag in the wrists. This delay, when approaching the impact area, is the harbinger of power. Witness Sergio Garcia, who is the king of lag.

So the swing thought/action is simply to pull the butt of the club downward toward the ball at a pace about the same as you would for your 7-iron. Your grip should, of course, be in your fingers, allowing the free movement of the hands and wrists in the downswing. As evolution has dictated, your mind expects the hands and arms to be in control of any swinging motion. Witness any chimpanzee. The nerve endings there are conditioned to react to an implement, in this case the golf club, that needs to be swung to fulfill its function, in this case propeling a golf ball a long way, accurately. Fingers are designed for fine, detailed work, like gripping, holding, and directing. The grosser body will follow the fingers. And the move conveniently and automatically tucks the right elbow into the right side of the body where it should be on the downswing. One less thing to think about in this complicated series of movements called the golf swing.

What about moving the body weight to the left side at the start of the downswing to prevent hitting the shot fat? Don’t you have to consciously do that with your hips first? In my estimation, the answer is no. The hands and hips start almost simultaneously as the downswing starts, moving naturally and easily forward. The more the wrists lag as you approach impact, the more time the hips have to move out of the way as the momentum of the swing proceeds. With the left foot firmly planted, the left side stiffens at impact, allowing you to “hit against a firm left side.” Braced as such, the hands and wrists can release and slam the club into the ball, keeping the head slightly behind the impact area. The firm left side (right side in a lefty) is a kind of ramrod to force the gunpowder (your wrists and hands) up tight against the projectile (the ball), and preventing misfiring. (By the way, as an aside, that’s the kind of reloading the Founding Fathers were referring to when they wrote the Second Amendment.)

The longer the club, the wider the stance, since controlling the swing is harder, the longer the implement. This will depend on your height though, as well. With all this swinging, golf truly is a balance sport, and a hand-eye coordination sport. The keystone in the above instruction is the head. With any movement, there is risk you will lose accuracy. Tiger Woods used to dip his head at the start of the downswing, and his driving would get him into trouble. When two-time U.S. Open champ Retief Goosen was a kid learning the game, his teacher would literally hold his head in place as he swung, to teach him what that felt like and how it could affect the results. The head is the axel: The hands and arms are the spokes: The body is the chassis.

You can apply this key move to almost any club in the bag. Just position the ball more towards the middle of the stance, the shorter the club. It works for the driver down to the wedges. Putting is a game unto itself. Entire books have been written on it alone.

And, of course, there is the mind. I tried out my key downswing move a few years ago, had great success on the range, then flopped with it on the course the first time out. As often happens, I tried modifying the technique as I was playing and wound up getting into deeper and deeper trouble. The mind was looking for a way out of its misery. So instead of sticking with the method and letting it find its level during actual play, I grew impatient and started my infernal trial and error routine, which is a recipe for disaster as you’re playing. When the pros talk about “staying patient”, I think this is what they’re talking about. Stay with the swing thoughts and actions you last practiced on the range and don’t change them because of a few bad shots.

This technique of driving the butt of the left hand down toward the ball on the downswing may take a while to settle into the mind and body. You may hit a few fat shots until the body finds the right timing in its move forward. But practice it on the range for awhile. Get comfortable with it. Let your confidence grow so you begin to expect positive results. Then take it to the course and see if it holds up. If it does, great. Ride the wave. If it doesn’t, that’s OK too. Return to the range and make sure you’ve ingrained the sequences into your routine. It’s all grist for the game improvement mill, and part of the challenge of this great game. 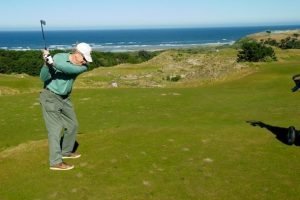 Looking for a good golf read? Consider my book, The Mindful Golfer: How to Lower Your Handicap While Raising Your Consciousness.

“Entertaining and informative, The Mindful Golfer expresses ideas very much in synch with Zen Golf in a playful and engaging way.”