You are here: Home / British Open / Mindful Golf at the Battle at Birkdale

Jordan Spieth was three shots clear of Matt Kuchar going into the final round of the 2017 British Open at Royal Birkdale. In the first four holes of that round, Spieth, unbelievably,  scored three bogeys, erasing that lead, giving Kuch and the field new life. Most golfers, pro and amateur, would have collapsed further from there, totally demoralized. Jordan ranted to his caddy, Michael Greller, about a “crap lie” after a wayward drive on the first, his mind heading for perdition. “Get over it,” retorted Greller, attempting to shock his snorting steed into some kind of GPS “recalculating.” The match was suddenly tied at 8 under, and would stay there until the infamous 13th. Spieth hit his drive way right, “the worst drive ever for a pro” proclaimed Johnny Miller–so far right the roving crowds and marshals couldn’t find it at first. They finally did on the backside of a sand dune that could’ve been named it was so high.

Jordan took a one stroke unplayable penalty, had the presence of mind to ask an official if the driving range was out of bounds, went way back to that area which was on a line of sight to the 15th green, and, after Greller showed him the line from the top of Mt. Sand Dune, smashed a crisply hit three iron to just a short pitch from the pin. Before Jordan’s shot, Kuchar had to be licking his chops, expecting a double or higher. But Spieth, knowing what he simply had to do, pitched it to within ten feet, and  knocked in the putt for bogie, to Kuch’s par–maybe one of the greatest clutch bogies ever in major golf.

But with the bogie, Spieth finally lost the lead to Kuchar for the first time all day, again big trouble for most golfers but not for Jordan. For what happened after the mini-debacle at thirteen was, perhaps, the greatest turnaround in major golf history. You see, Jordan Spieth’s mind is no ordinary mind. It is a mind unaffected by any previous happening. It is a mind that does not cling to or obsess upon adversity. For Jordan plays golf the way a truly mindful golfer should play the game, namely every shot is played on its own, unsullied by anything before it, with the preparation of a general readying for battle. Thoroughly prepared, performing the same pre-shot routine, whether it be a drive or a putt, he is in the present moment, so focused he can and sometimes does stop his swing even into his downswing if he is disturbed by some outside agent. The only other golfer I’ve seen be able to do that was Tiger Woods in his prime.

So Jordan and Kuch approach the 14th tee. Kuchar is 39 years old, a winner of seven PGA tournaments, including The Players, but never a major. He has prepared intensely for this moment: one shot ahead with five holes to play in, what the British insist be called, The Open (sticking a thumb in the eye of the United States Open). His opponent has just botched the previous hole, taking about 20 minutes to play one shot–a time some pundits refer to with disparagement–but was perfectly within the rules. He even came over and  apologized to his friend for the delay. No hard feelings from Kuch, who would no doubt smile at a mugger after handing over his wallet. He was playing steady golf, perfect for the finishing holes of a major you were leading in. Fairways and greens. Tap-ins after approach putts. An occasional bomb from the golf gods. Glory.

Spieth is 23, four days short of his 24th. He already has two majors in his bag, the Masters and the U.S. Open. He is not a particularly long hitter; and he has a kind of odd chicken wing in his left arm at and shortly after impact. He bows his left wrist at the top–a move that makes me cringe as if hearing the scratching shriek of chalk on a blackboard. Not even close to the smooth action of an Els, a Scott, or Sam Snead. But whatever he lacks in style in his long game, Jordan is near incomparable on and around the greens.

Fourteen is a long par 3, and Jordan does what Jack used to do to win many of his majors: hit it safe to the middle of the green. Again, his high golf IQ kicks in and manages the situation perfectly, putting the last hole back there with Alexander the Great. Over and done, and out of mind. Kuchar is on but misses his birdie putt. Jordan sets his body over the ball, left hand low on the grip, does a little waggle with his feet, then a slight forward press, and drops the 25-footer with the confidence of Young Tom Morris. Kuch acknowledges the effort with a slight thumbs up. He is not happy. Spieth just nods, cold-eyed, like Wyatt Earp. He is ecstatic, but he keeps his joy close to his chest. It is not in his nature to gloat. Some media have nicknamed him the Golden Child. He, reportedly, does not like this characterization.

On 15, a par 5, Jordan is on in two, but left with a long, double-breaking 48 feet from the hole. He is now even with Kuchar at 8 under. Jordan looks over his putt with Greller’s help, and Jordan being Jordan proceeds to knock it in,  center cut, for an eagle, motioning his caddie to retrieve the ball in a bold, almost arrogant, for Jordan, gesture. Kuch, undaunted and with cool grace, cans his 12-foot birdie putt. Spieth, a little like the Joe Lewis of golf, with one punch, now leads by one.

Meanwhile, up ahead, Li Haotong of China birdied his last four holes for 63 and finished at six under, the best finish for an Asian player at the Open Championship since 1971, which, by the way, was also at Royal Birkdale. But Jordan proceeded to birdie his next two holes, to take a two-stroke lead into the last. After his bogey at 13, he had played his next four holes in five-under par, a feat almost unheard of in major championship golf. When Kuchar found a greenside bunker and made bogey on 18, Spieth was able to tap in for par and win the championship by three strokes. With the victory Spieth joined Jack Nicklaus as the only golfers in history to win three legs of the career Grand Slam before the age of 24.

So is this the start of an era as we saw in 1996-97 with “Hello World” Tiger Woods? I don’t think so. There’s too much young talent out there, along with guys in their early 40s, hungry for a last shot at glory. Woods, himself, is out for the count. The overall perennial winner for years to come? The resilient game of golf for at least another 600 years–providing human beings survive that long. 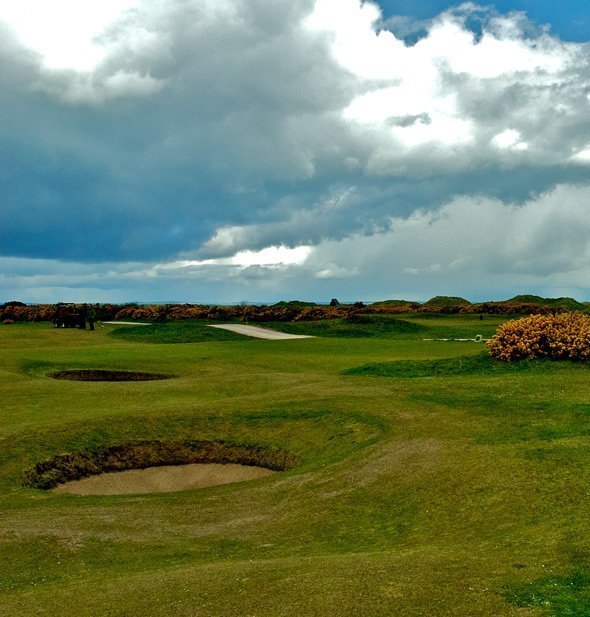