You are here: Home / Confidence in golf / Zen Putting: Overcoming Age and Doubt

In my informal research as a student of the game, I have observed that the older we get, the less adept we are in reading greens. This, of course, doesn’t always hold true, but witness Tiger Woods, Steve Stricker, Vijay Singh, Davis Love III, John Daly, and other pros in their late 30s and 40s. Their strokes seem solid and true enough but they are missing putts that they used to make routinely. Woods is the most graphic case of the bunch. The greatest reader of greens in the history of the game just doesn’t have it anymore. And unlike Johnny Miller’s prediction, I don’t think he’s going to get it back. Woods never missed from 3-5 feet, and from farther out, he was the best clutch putter on tour. No more. He’s still good, compared to other guys, but at best, he’s slightly above average. Stricker, chosen for the Ryder Cup team for his tremendous putting abilities, was terrible in that contest. And Vijay, who has retreated to the long putter, is 49 and hasn’t won in several years, after a marvelous stretch in his early 40s. Even John Daly, whose fluid, rhythmic stroke was the envy of all, still has that stroke, but often can’t find the line or the speed.

As for myself, I used to be a pretty darn good putter, helping me break 80 often years ago. I, too, still have a fluid stroke, keeping the head rock still, but, at 66, I just can’t sink many putts, particularly the short ones for par, the way I used to. It’s extremely frustrating after cozying up a decent chip or pitchto five feet (that right: the chipping’s not as good either) to miss a relatively easy putt for par. Demoralizing, really, and requiring a regrouping for the next hole, of which I am deeper in as per my ballooning score. With all the great equipment and helpful instruction, I’ve never struck the ball better from tee to green, but I just can’t read greens the way I used to in my younger days. I’m still good at reading the line of longer putts, by the way, of 25 feet and beyond, but my speed is often off by quite a bit. On the short ones, I have good speed but the line is off.  Knowing this, is there any way to correct this disheartening situation? For, as the name of the Golf Channel show indicates, golfers want and need a fix.

To be honest, I’m still working on it, knowing more of what I should not do than what I should do. Back in the day, Palmer, Nicklaus, Casper, and Trevino were my models, for, despite their wristy techniques, those guys could read greens. Today, my models are McIlroy, Fowler, Snedeker, and Poulter, with Rory at the top of the list. First, they don’t approach a putt like it was a coiled rattler. Older golfers, who’ve lost their keen ability to read putts, treat the putt like the approach-avoidance conflicts I studied as a psych major in college, often in doubt from start to finish, never quite commited to the line and speed as they crouch down, get up, walk around, get down again, stand over, back off, call in their caddy surgeons for a second opinion, replace the ball and pull their coin, stand over and address the ball, turn their eyes to the hole a few times, and…back away again ala Jim Furyk or Ben Crane.  First off, Rory enters the green after his approach like Robert the Bruce advancing into battle. He’s reading the putt as he strides, getting a feel for the lay of the land, perhaps through his feet and certainly his eyes. He’ll acknowledge the crowd’s cheers, but, believe me, he’s got that putt foremost in his mind.

With no other shot in golf is the mind any more important. Even an ounce of insecurity, one negative thought, a slight moment of doubt, will send infinitesimal twitches from the brain’s neuronal network to the synaptic nerves endings in the hands and fingers, raising the ugly head of indecision as the golfer stands over the putt. The origin of the yips, defined. With Rory, you don’t see this indecision much. Once he places his putter blade behind the ball, he pulls the trigger and sends the putt on its way. It’s as much a zen act of golf as I’ve ever seen. There is no fear in his stroke, and little indication of regret after he completes it. His mind, his body, his hands, his fingers, his eyes, are working in unison. And he doesn’t take a lot of time getting to this place before he putts. Again, he reads the battlefield green like a confident general, deciding where to strike, often without his caddy’s input, and sticking to it, come hell or high water. That’s key: Wherever the ball winds up, his goal is to strike the putt solidly on the sweet spot. This is where his hearing enters the fray. As in tee to green shots, he wants to hear that certain click telling him that he’s made pure contact with the putter. Yes, he wants to be aligned correctly. Yes, he wants to keep the head and neck still. Yes, he wants his eyes directly over the ball. Yes, he wants to minimize the movement of his wrists, making it more an arm and shoulder motion. Yes, he wants to pick a spot, over which he intends to roll the ball. But mainly, he wants to hear that magic click that tells him he’s done all the above antecedents correctly.

Poulter, Fowler, and Snedeker all have similar approaches to the putting game, for it is truly a game within the game of golf. As Davy Crockett, the great American frontiersman and legislator, once said, “When you know you right, go ahead.” No doubt. No fidgeting. No thinking. No backtracking. No fretting. Size up the putt from as many angles as you want. Decide on your line and how far back you’ll draw your blade or mallet. And stroke the bloody ball. Come hell or high water. No guarantees, except that you’ll know you’ve hit your target cleanly and solidly. The true target? The ball, which we tend to forget as we golfers age. 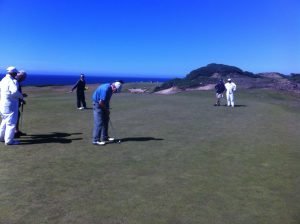