You are here: Home / Breaking 80 / From Unnerved to At Ease

I’ve written extensively on taking your driving range swing with you to the course, and, for me, this is perhaps the most challenging aspect of the game. At the range, my body is loose and relaxed; my mind is active with swing theories and results. On the course, I tighten up with thoughts of targets, hazards, scores, and the challenge of having just one try at each shot. That’s the reality: Those are the rules. And, as a result, on the course, I become unnerved, which, in golf, with all its permutations and combinations, means screwing up in one way or another. Just one neuronal lapse of confidence; just one swing sequence slightly out of sync; just one stray thought that takes you out of the present moment; just one poor decision around club choice; just one link of doubt in the chain of concentration, and you’re behind the eight ball, often playing catch up. And the bitterest pill to swallow, unless you’re playing Two-Ball or Mulligans or “Go ahead, take another,” is coming to terms with a game that only allows you one chance per shot. I don’t know the actual statistics, but I think that’s the main reason more people use the driving range than are actually playing these days.

Now if you’re just a recreational golfer, unconcerned with official handicaps, tournament or even informal competition, and the traditions of the game, you could toss another ball down after a poor shot and do a “take over.” Personally, I think that’s fine, and offers a good chance to practice while on the course. Or to remove the pressure inherent in the game, you could play just one ball and not keep score. That should eliminate any frustrated ambitions and embarrassments since score is a major factor of your nerves being on edge in this sport. You could also, as my buddy Steve and I often do, play a game of pars, only counting pars and birdies, and picking up when you go beyond par on any given hole. That eliminates high scores but still retains a competitive element via a form of match play. It also speeds up play, another reason many are dropping out of the game. I’m very much in favor of this as long as your buds agree with the format.

But if none of the above alternatives appeal to you, and you want to play the game as the pros and advanced amateurs often do, then you’ll have to work hard at relaxing your mind and body when you take your game to the course. So you’ll need to develop a swing that holds up under the pressure the course engenders–a swing that is often unnerved to one that is primarily at ease. First, at address, after positioning the club face square to your intended target and the ball on line with the sweet spot, let the arms hang straight down and keep them as free of tension as possible. Next, waggle the club in order to stay loose and athletic at the start, shifting your weight forward and back and forward again to get these moving parts in pre-swing mode to prime them for motion. Dustin Johnson is a great example of this action. He represents golf at its athletic best.

The swing then starts back with a subtle forward press. Brandt Snedeker, another athletic swinger, starts with a slight regripping of his right thumb. Gary Player used to–and still does at 80–kick his right knee slightly toward the ball. Nicklaus used to straighten his forward arm to trigger his swing’s start (my favorite). You might remember a couple years ago Kevin Na’s struggle with his trigger action, frozen and unable to get it going. He finally got through it, but it caused him great consternation and embarrassment as he stood there totally unnerved by the tension and pressure of the situation.

All of what I’ve just described are great anecdotes for keeping tension out of the swing while on the course. The sequence of what happens next, namely the rest of the swing, depends on the work you’ve done on the range. So the previous actions are part of the transition that helps you bring what you’ve learned at the range to the course. In other words, your goal is, through the application of the right fundamentals, to groove your swing to such an extent that not much thought is needed when the swing begins to get too fast to really think of what to do. On the range, you can think about the antecedents to success of your swing. You can apply drills you learned from your pro or on TV or YouTube. But on the course, once the swing has started, after the trigger, any thought, other than a simple swing thought or two, is an obstacle to success. The swing happens too quickly for the mind to track the actions of the body.

So, by all means, on the range think through and experiment and closely monitor your results, making adjustments where needed with clubs throughout your bag. If you’re at that level of proficiency, practice working the ball right or left, high or low. Practice striking the ball squarely on the sweet spot, feeling the solidness, or lack of it, in your hands, and listening for that sweet sound of a well struck shot–iron, wood, or hybrid. You’ll know it when you feel and hear it. You’ll know it when you see its trajectory and see where it lands. Lanny Wadkins, when he first started playing the game, practiced on the range for many hours before he attempted to play the course. Consequently, as a youngster, he broke 80 on his very first round.

So give good attention to the transition between range and course, between address and the actual start of the swing, between active thought and the mindfulness (in practice, the same as mindlessness) needed during a swing. A time for some form of meditation could also help acclimate the mind to get used to periods of time without thought, which golf requires. This could be why South Koreans, Japanese, and Thais are so adept at the game. In these primarily Buddhist countries, they are often brought up with the value of meditation as part of a daily routine. We Westerners, too, could benefit from periods of quieting our minds, and letting our well-practiced bodies do their thing on the golf course. 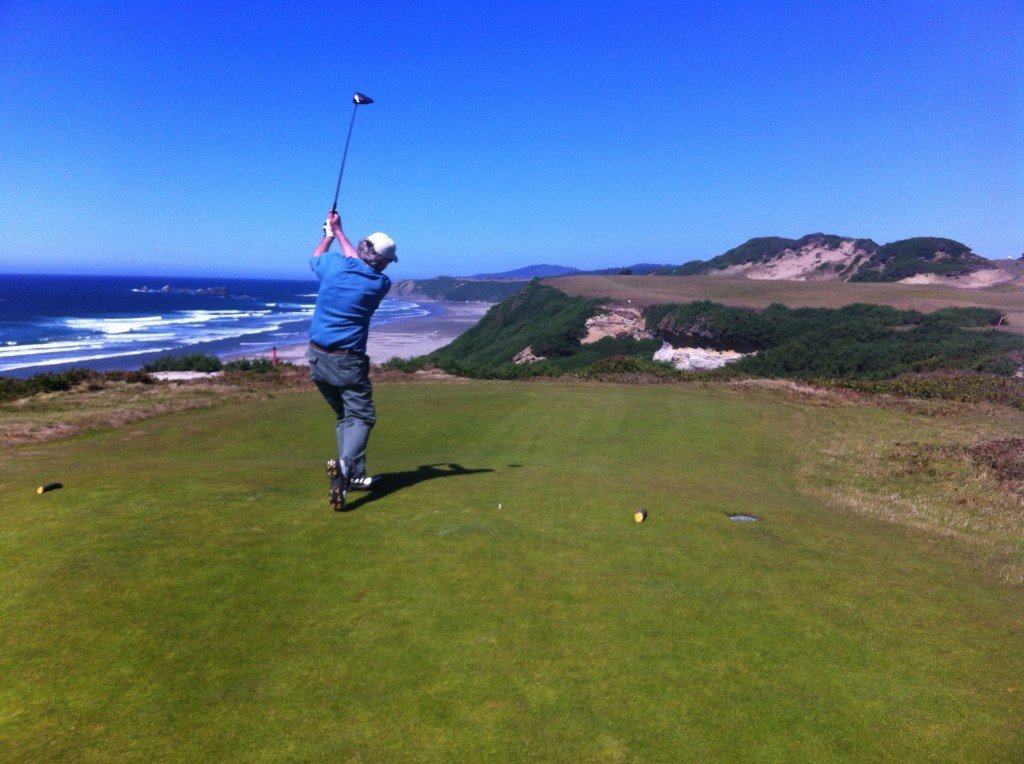 Congrats to Dustin Johnson, winner of the Genesis Open, winner of PGA tournaments for ten years straight, joining Tiger Woods and Jack Nicklaus as the only other players who have accomplished that feat, and now ranked Number One in the world. A Hall of Famer in the making.