You are here: Home / golf values / Elite or Not so Elite? Trump’s views on who should play

So what do you think? Donald Trump thinks golf should be for the rich elite, rightly unaffordable for peons like you and I. We should only have golf as a distant goal to work towards until we have attained a place in life where we can afford to join folks like him and play and stay on ridiculously pricey courses and high end resorts like he owns. I love the game, but if prices went up tenfold at my local muni as a result of some executive order he issued on Twitter, I guess I’d give up the game and take up badminton or old guys basketball to occupy my free time. Under his new rules, of course, Trump would be growing his fortune but not the game. As he said during an interview with Fortune magazine, while still on the campaign trail in June of 2015, “If you have great property, it’s still a great business. But you have to have great locations and really good courses. I have the very best courses, in the best places. At Doral [in Miami], as an example, our “Blue Monster” course opened up, and I’m getting $475 a round, it’s just been so successful.”

Further fleshing out his deconstructive ideas on growing the game, Trump continued in the Fortune interview, “I feel golf should be an aspirational game, something people aspire to. People should come to golf, golf shouldn’t come to them. They shouldn’t do many of the things that have been done over the last five years. I think the bigger hole idea is just terrible. Golf is the sport of business…I hate to see it cheapened with soccer golf or kick-golf, whatever it is they call it. A lot of businesspeople play a lot more golf than they want you to think they play. I know many businesspeople who say to me, ‘Don’t tell people I’m a good golfer.’ They don’t want that image, necessarily. But again, so much business is transacted on golf courses. And it should be aspirational as opposed to widespread. Golf should be something beautiful, elegant, something people aspire to play eventually.”

Is that elitist, asked the Fortune interviewer?

“It may be elitist,” Trump answered, “and perhaps that’s what golf needs. Let golf be elitist. When I say “aspire,” that’s a positive word. Let people work hard and aspire to some day be able to play golf. To afford to play it. They’re trying to teach golf to people who will never be able to really play it. They’re trying too hard. Because of the expense of playing, and the land needed, golf is never going to be basketball, where all you need is a court.

“All these great athletes, you know what they do when they retire? They do nothing but play golf. Basketball players, hockey players, football players, all they want to do is golf. Let it be aspirational instead of bringing it down by trying to get players to do it when they’re 15 years old and they’re also learning other sports. I think it’s very damaging to the game.”

So unless you can afford the new green fees at Pebble, which are now $525, and be able to play that Number 1 public course on a weekly basis, flying in from wherever, it’s time to hang up the clubs, says our new president, whose own stock of 12 or so courses require that amount or more to play. Make more deals, stockpiling loads of money, and maybe one day you’ll be able to return to that “noble and elegant” game, much like bored noblemen did 600 years ago, come to think of it. It’s kind of a retro plan for limiting the game to the rich and possibly famous and fattening the coffers of the golf course resort owners, like Trump.

As for working class stiffs–even the ones who helped elect the guy–fegetabout’it. “Shut up and get outta here, losers! Golf ain’t for people like you. Take your snotnose kids and get off the premises. There’s a frisbee golf course down the street that’ll take you in for pennies.”

Now this scenario may not seem possible or plausible, but neither did Trump’s victory a few months ago. All it takes, as Trump discovered, are just a few well-placed Tweets about elite golf, and his lock-step core will jump on board and start sending death threats and hate mail to low-cost courses around the world demanding they raise their prices, or else. Golf is for making deals. Big deals. All others needn’t apply…or play.

Get outta here, kid. Ya botha me…

I know. Go ahead and castigate me for politicizing a golf blog. Go ahead and blast me with hate mail, if you like. Or, bloody hell, unsubscribe. Or…maybe…thank me. But my job is to promote golf for anyone who wishes to play. Anyone of any income, any job, any faith, any race, any gender, any creed, any age, any political persuasion, any disability, any anything. Golf is a game beyond any socio-economic distinctions. It’s a game that should be available to anyone, as it was for me when I was 14 in Philly and cost two bucks to play. I was a super shy kid and golf helped bring me out of my shell. I didn’t have to “aspire” or financially qualify to play this great game. I put my budget in danger a few years ago to play Pebble, and can now say I did it. Probably never will again, unless I come into some discretionary cash along the way (although I have to say Pacific Dunes at Bandon Dunes resort is a better venue). But at 20 bucks at 1 PM, I’ll stick to Oakmont Golf Course near home for now…as long as the president of the country doesn’t issue an executive order banning me playing a course under 500 per round. 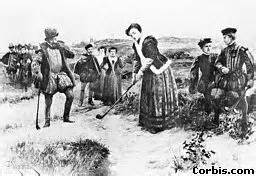 Just blowing off some steam, folks; and trying to grow this amazing game, not limit it to the ultra-rich.