You are here: Home / Confidence in golf / To Walk Towards the Fear

Jason Day said that on a TV commercial recently, and it’s good advice, whether you’re a tour pro or just an ordinary bloke battling a panic disorder. In psychology, it’s a form of treatment called Cognitive Behavioral Therapy (CBT), and essentially it says just that: move in the direction of what scares you not away from it. Moving away from it further intensifies the conditioning that caused the problem in the first place. Golf is a great practice ground for confronting fear, and, at the same time, be out in the fresh air, amidst nature, not at work, and, hopefully, having some fun. A friend of mine told me he’d had a terrible day recently during a tournament, finding himself behind almost every tree on the course. He’s at that critical point where the trauma of that day could enter his mind and create such an atmosphere of fear that he could leave the game possibly for good. Instead though, as I write, he’s on his way to see his pro to try and straighten things out, get back on track, and face down that fear of repeating his poor performance.

Pros go through the same thing, especially the most successful of them. Take Jordan Spieth, for example. After his Meltdown at the Masters, he could be sufficiently burned to want to hide from competition for awhile (which he’s apparently doing). The pressure on Jordan right now is enormous, with the press and public wondering if he’ll ever recover. If that anticipatory fear takes hold in Jordan’s mind it could develop into a kind of PTSD which can metastasize even into a phobia. Golf can test every aspect, every layer of one’s being: physical, emotional, mental, and even spiritual. If you approach the first tee with the slightest amount of anxiety in your body/mind, the chances of hitting the shot you envisioned are

slim. And the source of that anxiety really doesn’t matter. The anxiety a Neanderthal felt when a saber-toothed tiger was about to attack was not much different from the anxiety we feel today when a marriage is falling apart. The symptoms–fast pulse, sweaty palms, cold hands, light headedness, dizziness, among others–have remained pretty much intact throughout our evolution. After a traumatic event, like Jordan’s disaster at the 12th hole at Augusta National, the mind has a tendency to anticipate the same symptoms the next time a stressful event is about to happen. This is called anticipatory anxiety and can be as much or more of a problem than dealing with the actual, in-the-moment, event. I speak from experience here since I still have a degree of anticipatory anxiety from a traumatic event that happened to me in the summer of 1969! No need for me to elaborate since I’ve covered it elsewhere in my published writings, but the trauma became so embedded in my synaptic memory, that I became conditioned to anything that triggered or reminded me of the event in the first place. To paraphrase FDR, I did indeed fear fear itself. On the plus side, it’s what spawned my becoming a writer and meditator.

Not too long ago, on the Golf Channel, Dr. Ara Suppiah was discussing the medical contents of one of the pros he works with on tour, and amidst the band-aids and Advil and power bars, he came upon a bottle of Ativin, one of the most prescribed anti-anxiety benzodiazepines in the world. I’ve had some experience with this medication, and, can tell you, if taken beyond occasional, as needed use, it is highly addictive, potentially leading to severe withdrawal symptoms, as difficult to deal with than withdrawal from heroin. Such is life on the PGA tour where

performance is the constant measure of success or failure. Ativan, and its cousins (which are not banned by the Tour), works quickly and effectively which sounds good, but has its consequences, not unlike a few tokes on a marajuana cigarette. You get a bit too relaxed and lethargic. Again, I’ve experienced this first hand back in the day, even with pot that wasn’t nearly as potent as it is today. And you get dependent on those quick results and the high that comes with it.

Performance ironically begins to drop since you lose the edge that manageable anxiety produces. In other words Atavin, et al, works too well when one is playing a performance sport like golf. And that’s where CBT, breathing techniques, and meditation outshine all of the benzos, weed, alcohol, and other addictive substances. The former are proactive remedies that help you confront the fear directly as opposed to the latter which are forms of running away from the fear you may be conditioned to. And the more you run away from fear, the stronger that fear gets.

So how does this relate to we average dubs whose knees are knocking as we approach the ball on the first tee, or when hitting an approach over water, or landing in and facing a shot out of a fairway bunker–all the shots that can elicit anxiety symptoms that can affect our performance? For most of our poor shots happen as much out of our 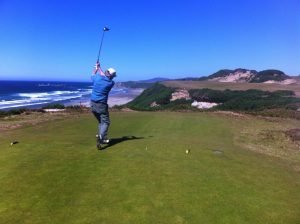 mental attitude towards the shot as our technique in handling the shot. Now, as far as technique is concerned seeing a pro and spending time on the range is advisable. For with better understanding of the swing, and repetition through practice, self-confidence increases, and there’s nothing like a dose of self-confidence in the game of golf. That also reduces fear of an impending shot, for you’re no longer moving head-long into the unknown. You may not be able to control all the external obstacles involved in playing this game, but you can control how you will handle an obstacle once it arises. So see a trusted pro and practice different shots.

But fear can also come from negative self-talk, which is why many touring pros employ not only swing coaches but sport psychologists. Negative self-talk can and must be countered with positive messages you send to the brain during difficult situations. So in planning your shot, you can certainly take into account the perceived trouble, but when all is said done, the final thought, in what Annika calls “the think box” before you enter “the play box”, is where you want the ball to land, not where you don’t want it to land.

Now if you have the confidence and skill to work a ball, that might involve starting the ball towards the trouble and having it curve around or away from it, a prime example of CBT in action. That’s a great reason to learn how to work, or curve, a golf ball. It gives you more arrows for your quiver without adding a single club to your bag. And with golf, the more arrows you have to work with, the more fun and lower scores you will attain.

Of course, if you don’t yet have the ability to work the ball, you’ll need to rein in the ego and play it safer, perhaps giving up a stroke rather than flirting with the hazard. Accepting a par or bogey is much better, and smarter, than bringing high numbers into the equation. That’s still going towards what scares you, but in a smarter way than doing something stupid and winding up wet and even more afraid of hazards down the road.

More from The Mindful Golfer at golfwrx.com.

The Mindful Golfer: How to Lower Your Handicap While Raising Your Consciousness, the book