The concept of forgiveness, usually the topic of Sunday sermons, has been co-opted by golf club manufacturers of late, but if you really want to experience forgiveness in relation to golf, keep your head still during the swing, and particularly through the impact zone. It’s an old saw that has held up over eons of struggling with this game since its inception. Of course, to maintain a still head is easier said than done, given that our eyes are a part of that head and are only able to look out beyond and not at the head itself, especially during the second or two of the 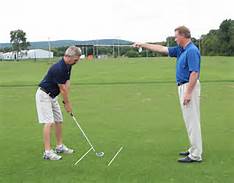 swing’s duration. Cameras are helpful, on the range, and under the control of an instructor. But when we leave those safe environs and head out to actual course conditions and challenges, the swing thought of keeping a still head often gets lost and forgotten in the din of all those other variables we have to attend to while playing a round of golf. For the mind, also unable to see its container–the head–starts a-spinning when things begin to go south, as they inevitably do, even for the most proficient of golfers. 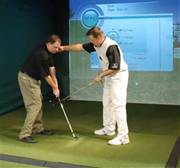 For backswings and follow throughs may get as goofy as Charles B’s, but if you can keep the head still, you will more likely keep the club on plane, and a club on plane will help insure that the clubface at impact will be square to the intended target, however many yards away. This applies to a drive as well as a chip (and a putt, for that matter). Unfortunately, over the course of a round, we can easily lose contact with the position of the head, making it a kind of loose cannon, releasing the forces of luck into the swing. And the odds of success become very poor indeed. So how can we monitor our potentially wayward head, and make sure it doesn’t stray onto the road to perdition?

I was in the gym the other day, working with my trainer, Forrest Granzotto, a young fellow majoring in kinesthethiology, and who, by the way, is a caddie and low-handicap golfer. He began to notice certain mis-alignments that have crept into my body as I’ve aged–positions I hadn’t been aware of like one shoulder being lower than the other, affecting my posture while working some of the Nautilus machines. It took Forrest’s trained eye to see those subtle changes which for me had become so conditioned that they had melded into something I now considered normal. The aging process can do that. The body seeks a certain comfort level as we age, with the resulting postures and positions not being particularly conducive to effective golf. This in turn can lead to a loss of power and consistency when combined with the added stress of play-it-as-it-lies, one-shot-only, golf. When pressure mounts we often resort to default positions that are familiar yet dysfunctional.

The key, then, is to increase our level of mindfulness. And this is best accomplished with paying particular attention to our set up at address. For that is the approximate position we hope to return to at impact–at about 80-100+ mph. So, after leaving Annika’s Thinking Box, behind the ball where you map out your strategy for 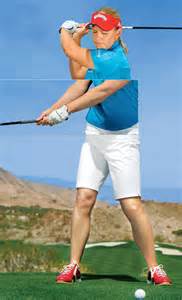 pulling off the next shot, you enter the Play Box where you set up and aim towards your target. Here’s where you set your head position after figuring out proper ball position, shoulder-hip-knee alignment, clubface position, and grip  (all of which you can explore in the archives of this blog or from my book). Knees are flexed in this athletic set up. Notice the head. You can’t see it, but you can feel it, via the eyes. When two-time U.S. Open champion Retief Goosen was a kid in South Africa, his instructor would literally hold his head in place as Retief would swing. That feeling of a steady head was a tactile one, felt through the hand of his teaching pro, a powerful reminder leading to his later successes.

My own tendency, as I age, is to move the head forward as I pass through impact, causing the clubface to open and the ball to fade. If I play for it, it can work out fine, as I take the left side of the course out of play. But at times, it doesn’t fade, and the notorious double-cross occurs and I’m in the trees, or whatever, to the left. Not good. So I’ve got to make an extra effort to steady the head at impact. My strategy is to come at the ball from the inside, tucking the right elbow into my right side. It involves a slight rerouting of the club, ala Rory and Sergio. 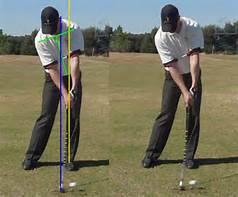 My mental image of my head at this point (and it is a mental image) is slightly behind the ball. That gives me a little leeway if the head does stray some forward. The baby fade that sometimes results doesn’t usually get me in too much trouble if I’ve aligned for it. But the steadier I can keep the head’s lateral movement, the better the contact, and the straighter the ball travels. Also, regardless of where the ball finishes, I really love the sound and feel of that solid contact. It’s just plain satisfying, and I think one of the factors that gets people into this game and keeps them trying to stick with it and improve. That tendency of mine to move the head forward is an example of the body looking for a comfortable place to hang out since the ability to keep the head steady at 90 mph requires a fair amount of physical effort and strength. After impact, of course, the head naturally moves up and out of its position and into the follow through.

Keeping a steady head also requires an ability to concentrate and stay in the moment during a rigorous and fast movement of the body–a movement that many of us are not used to, and not prepared for, in our daily lives. I often recommend sitting meditation as part of learning how to play golf with increasing skill. But such a practice is relatively easy in maintaining concentration and steadiness compared to golfing meditation where you are stilling the head and thinking mind at high speeds…and all with impeccable timing!

But when it all comes together, there’s nothing quite like it, is there? A combination of pure fun and accomplishment that follow equal doses of perseverance, patience, skill, pride, and determination to stick with it.

The Mindful Golfer, the book

More of my original posts at GolfWRX.com