You are here: Home / Confidence in golf / Tracking Matt

The word “natural” implies an athlete who came into this life with his or her skills. Tiger Woods, Michael Jordan, Bode Miller, Babe Zaharias, Michael Phelps, and Serena Williams come to mind. When you see them run, jump, walk, swim, or swing, most of us can spot a natural straightaway. There is a certain grace about them, a certain confidence when playing their favorite sport, a certain…well, almost arrogance around the certainty of their ultimate success. Tiger Woods, in his prime, never saw a putt he didn’t think he could make, and, yes, he made most of them. Michael could just about fly over a defender leaving him in the dust of his pronghorn speed. Bode always had victory in mind on any hill he met. Phelps had to be part fish from the get-go. Babe gave it her all and figured she’d win every tournament she entered. And Serena…when behind, which isn’t often…has merely to bear down, stare that stare of hers, and will her way to a win.

Of course we don’t often get to see a natural growing up. By the time they hit the news, they are well along to stardom and fame. Wouldn’t it be great if we could spot a natural early on and do a kind of longitudinal study of his progress into adulthood. Well, I believe we’ve got a golf natural in our family.

Matt is my niece Ellen’s (my brother Hank’s daughter) and her husband Mike Barkann’s kid. That would make this 14 year-old my great-nephew, and indeed, I held Matt in my arms when he was an infant. Unfortunately, I didn’t get to see this youngster much in his earlier years since I lived on the West Coast and he on the East. But I was in touch when he began playing golf at around 9, and when he started competing at 12. 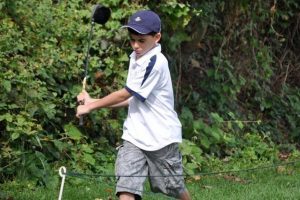 Matt’s scores, so far, are good but not exceptional. He shot his best score yet in competition the other day, a 78 on a difficult layout, but followed it the next day with an 87, playing in 100 degree heat outside Philadelphia in a July heat wave. His best score on his home course, the challenging White Manor where Sean O’Hair developed his golf chops, was a 73. I’ve played this course several times, and, believe me, you’ve got to be firing on all cylinders for such a score. 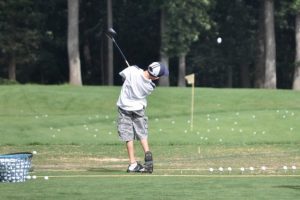 But the most impressive feature of Matt’s game at this point in life is his driving. He regularly smashes the ball 290 with a slight draw, farther and more accurate than most tour pros. Just how does this tall (he’s 6’1” and must have grown 2 inches the week I was there!), lanky, affable kid accomplish this extraordinary feat time after time? I visited Matt and his family in late July and in between thunderstorms, got to play 9 holes with my great-nephew on Llanerch Golf Course, near Havertown, an old, classic course that hosted the 1958 PGA Championship, and was the first time the PGA was played under stroke play instead of match play. Dow Finsterwald was the winner, with Billy Casper the runner-up. Sam Snead, who led after 54 holes, finished third. On the day we played the front nine, Matt hit 7 of 9 fairways with high, towering drives that averaged over 280 yards.

Exactly how he does this, I’ve yet to determine, but he obviously takes fully advantage of his height to attain a  wide swing arc. He is also able to torque his upper body so his back is facing the target at the top of his backswing. With that kind of flexibility, along with a wonderfully straight left arm, his hands need only reach ear height at most, nowhere near parallel. He’s then in position to take advantage of a dynamic tension as his sliding hips start the downswing before the arms and core start their action. With his arms and core integrated, they are ready to attack the ball with a swing speed that has been clocked at 105 mph. His hips turn minimally on the backswing, as modern instruction often dictates, making it relatively easy to start the downswing with that slide of the hips forward, followed by a pulling down with the left hand, facilitated by the hips turning out of the way coming down and through the impact zone. As Matt envisions it, the hips slide a bit then the hands pull down.

Does it work every time? Of course not. He gets quick at times, causing too much of a hook, or, as Tiger has struggled with, his hips will sometimes out-race his arms forcing a block to the right. But when things are cooking in the right sequence, he produces that soaring slight draw, that made me step back in awe. 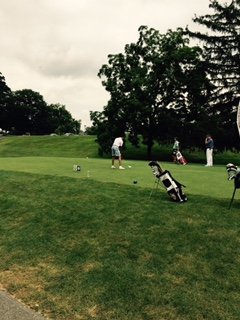 Of course, golf is much more than long, accurate drives, and Matt needs to work on his wedge play in order to take more advantage of those drives. On 425-yard holes he’s often only a pitching wedge away, but needs to refine his ability to get the ball closer to the hole to have more birdie attempts. And he’s working with his coach and instructor John Donigan to do just that.

John coaches PGA touring pro Sean O’Hair at White Manor, and is a master at guiding young men and women in learning this daunting game. He’s a good-natured taskmaster who doesn’t inflate his students’ heads with too many “atta’ boy” and “good job” encouragements for lousy efforts. If John compliments you, you can be sure you’ve earned it.

“He’s becoming a player,” John said of Matt, as I greeted him near the range the other day, as he ended a junior clinic. “He’s coming along nicely.”

Matt’s chipping could use some work as well, especially out of thick rough near the green. He uses his 60-degree mostly, and he needs to experiment more with other clubs from different lies.

“I love this game,” Matt told me, smiling, before I headed back the airport for my trip back to California.

“Keep at it, Matt,” I replied. “Put a bit more work into your scoring clubs, but leave that driver swing alone, Kiddo.”

And one other observation this mindful golfer must mention. About a year ago, I visited my family and played with Matt and his beloved grandfather, my brother Hank. Hank and I made a few good shots, to which Matt gave no acknowledgement of praise. This time, though, this increasingly conscious and polite young lad praised me every time I made a good shot, as I did him.

After big hugs for him and my family, I waved to Matt as he headed back to the range to prepare for his 4 o’clock clinic with Coach Donigan. The kid is a natural but he knows he needs to practice hard to get better. And don’t we all.

My book, The Mindful Golfer: How to Lower Your Handicap While Raising Your Consciousness, has advanced to Amazon best seller status among all golf books. Check it out at Amazon.