You are here: Home / Downswing / Getting Unstuck

One of the most common problems with a golf swing is getting stuck at the top, then compensating by coming over the top to start the downswing. This leads to a plethora of possible catastrophic results including a pull, a pull hook, a push, or a slice. Of course the hands can save the shot in a last ditch effort at impact, but I wouldn’t depend upon it. Getting stuck starts with an inside move to start the swing, leading to a stuck position at the top. So the remedy must also start from the start. You’ve heard this before, but the hands and arms and clubhead must stay in front of the chest right into the top of the backswing, just the opposite from moving them to the inside where getting stuck is probable. And even the best can fall into this malady. Tiger Woods, late in his prime, would get stuck, leading to wild tee shots coming off his “explosive” swings at times. At the top of the backswing, I like to let the wrists cock, adding to the arc of swing and potential swing speed.

Keeping the arms and hands in front of the chest helps keep the swing on plane which serves to prevent coming over the top at the start of the downswing. Now you start the downswing on plane and unstuck. Your weight begins to shift forward, the head is steady, the forward arm is fairly straight, and the arms begin their descent towards the slot. The hands and wrists are still fully cocked as lag is formed coming down. Gravity needs no swing thought. For the driver swing there is more margin for error hitting a ball that is teed up and played more off the forward foot. For irons and hybrids, impact needs to be a bit more precise, requiring better timing and sequencing starting down from the top. There’s less margin for error for proper weight shift to the forward side, and the head needs to stay steadier. You want to get your weight over to the forward side faster to prevent fat shots. If you practice enough, the body and mind develop their own muscle memory and intelligence so no need to always be attaching swing thoughts to actions they already know how to do. There’s also no need to reroute the swing at the transition in order to bring the club to the inside of the swing path (although you could experiment with this). Just bring it down along the same figurative plate of glass as Hogan demonstrates in Five Fundamentals. Prime present day practitioners of this swing: Brooke Henderson, Brooks Koepka, and Bernhard Langer.

So the key to getting unstuck is to not to get stuck in the first place. Give it a go on the range. You should see your shots fly straighter, and possibly farther from catching more of the sweet spot. You’ll know right off from the sound and feel of direct contact–those elements of golf that bring me back for more of the same. 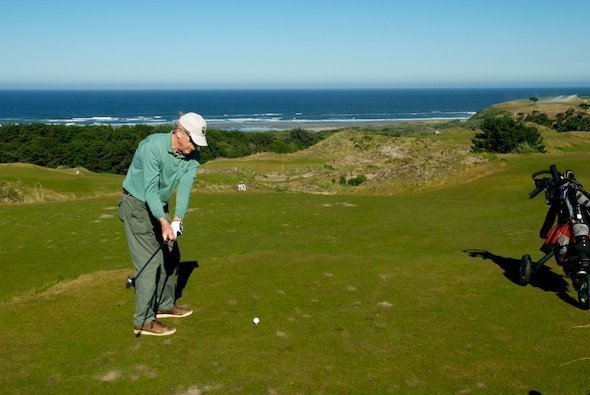 My friend Rob Wallace reminded me that I didn’t much comment on the U.S. Open a few weeks ago, and wondered about my impressions. I was very impressed with the skill and composure of Brooks Koepka, and expect to see this fellow on top of leaderboards for years to come, especially in the majors. But 16 under for a U.S. Open? Whatever happened to Old Man Par for our Open? Generally, I liked the Erin Hills venue, but next time, narrow the fairways and make that rough more of a daunting possibility if you stray with the tee ball.

Congrats to Bryson DeChambeau for his first win on the PGA Tour, The John Deere Classic. This man swings a bit like Mo Norman with irons all of the same length. I wonder what that’s like. Anyone out there with clubs of the same length?